A photo was published of the royal family at a private celebration for the 60th wedding anniversary of former king Albert II & former queen Paola. 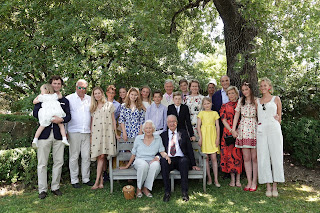 The only one absent was prince Joachim. None of the partners of princess Astrid's unmarried children are in the picture but they could well have been invited of course.
op juli 12, 2019